Skip to content
We finished our four week archery course with 20/20 Archery this weekend. We had a great instructor, and we both enjoyed the lessons.
I just brought Maplin's USB Digital Microsoft with 400x magnification, which is advertised as having Windows-only drivers. System Profiler identified the chipset as being from Vimicro Corporation. I went to the Driver Download section of their website and downloaded (and installed) the DRV_ZC0301PLus_070305 driver. I then opened up Photo Booth, and was able to select the Vimicro camera as the video source. What I should have done was just try and access the Microscope using Photo Booth before I installed the driver, as I half suspect that there was no actual need to install that driver. [caption id="attachment_294" align="aligncenter" width="300" caption="Close-up of a new razor blade"] 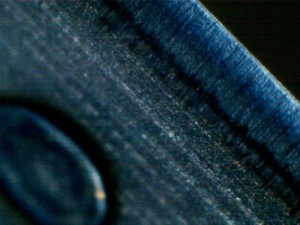 [/caption] Please try to use the microscope with Photo Booth first before downloading the driver, and let me know in the comments if that works.

Here is a great presentation given by Jason Yan and David Cramer of Disqus fame about how their site was architected in order to scale to handle 75 million comments.